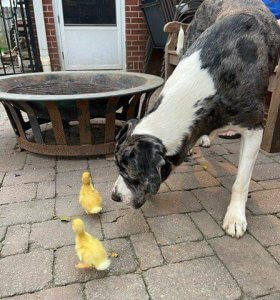 Meet Sir Nugget Butkus, a Kennesaw pup praised for his work ethic. He’s half Great Dane and half English mastiff, and he can be found lending a helping paw at Memory Lane On Main, a thrift store owned by 16-year-old entrepreneur Baileigh Denatala. Nugget is the Denatala’s family pooch, and assists with the daily operations, alongside Baileigh’s mom, Amanda, and siblings, Anthony, Nathaniel and MacKenzie.

“Mondays, he harasses me,” Amanda said. The shop isn’t open on Mondays, but Nugget wants to go to work. Nugget especially likes when he can claim whatever he wants from estate and garage sales, and from donated items. His current favorite is a stuffed basketball.

At the shop, Nugget stands as lookout for the next customers. The family describes him as a much needed comforter.
“People are drawn to him because of his adorableness,” MacKenzie said. 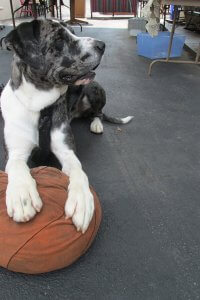 This Most Valuable Pup will weigh in at 200-250 pounds when full-grown in about four years. Because of his current size, the family asks shop visitors if they’re afraid of dogs when they enter. Once given the all clear, out Nugget comes, wagging his tail in wholehearted, happy-to-see-you-ness. His family praises him for never breaking anything, including Amanda’s favorite vintage colored glass collection.

“He’s goofy, though,” Nathaniel added. “He mismanages his feet, surprisingly though, that never happens to him when he’s on the job.”
And while on the job, he gets a lunch break just like everyone else. Nugget attentively waits for a few morsels of food, while his humans brag about him. According to Baileigh their dog gives the best snuggles, while Anthony, the youngest of the clan, thinks their pup is the cutest thing in the universe.

A friend to everybody including the family turtle, Nugget loves the paw population best, especially those who accompany their people while searching for antiques. He is so tenderhearted; the family has observed him following a trail of ants so as not to step on any.

From lunch leftovers to a full-time job, for which he receives gratuities in the form of snacks and toys, Nugget doesn’t ask for much. Of course, he loves his devoted family, along with his friends that span the ecosystem, and it’s what he gives that is priceless. While people are venturing out trying to overcome these COVID blues, Nugget is on the job, ready with a little doggie encouragement.

– Tamra Anne Bolles has a bachelor’s degree in journalism from the University of Georgia and a master’s in instructional technology from Georgia State University. She teaches for Cobb Schools, enjoys writing and supports local animal rescues.