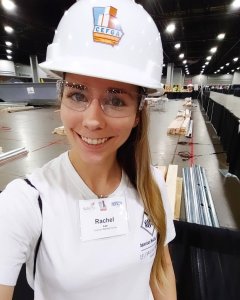 With National Women’s Month in March and National Welding Month in April, I thought May would be the perfect time to profile one of our industry’s fastest-rising stars. I met Rachel Lee through the Atlanta chapter of the American Welding Society. Like so many others, she began her journey after attending a suburban high school that pushed a narrow college prep outcome.

Describe the path to your career.
After high school and two semesters of college, I got a job as an apprentice at a jewelry store. That is where my love for all things metal took root. A year later, I took a position creating pieces for a jewelry designer in Atlanta. I loved every minute of creating those pieces, but I was newly married and needed to find a job that could help provide financially for my family. I went back to work for my dad, who owns an electrical contracting company, so I could go to school full time and work for him after school and on Fridays. I graduated, with honors, from Lanier Technical College with a diploma and certificates in four types of welding.

Why did you become a welder?
I wanted to go back to school to learn something that I could make a career out of but that I also enjoyed doing. I learned that Georgia was offering the High-Demand Career Initiative that would pay tuition for in-state students who were willing to learn one of the in-demand fields. After reading over the list of the 17 different programs offered, welding and joining caught my eye. I immediately pictured myself hood down and sparks flying. I went the next day to the Barrow County campus and spoke with the instructors. After touring the facilities, I applied the same day for the next semester. 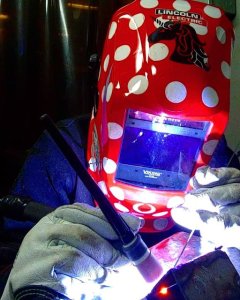 Tell us about your role at Fortis College and with the American Welding Society (AWS).
I am a part-time welding instructor at Fortis College in Smyrna. I teach Introduction to Welding and Blueprint, among other subjects, from 8:30 a.m. to 12:30 p.m., Monday through Thursday. After I complete my day at Fortis, I drive to Buford to work for an electrical contracting company that does big-box retail lighting all over the Southeast.

For the AWS Atlanta section, I am an executive board member, treasurer and social media coordinator. As treasurer, it is my job to monitor the accounts, work with the board to establish the budget and reconcile the accounts for the end-of-year reports.

How can we bring more women into welding?
There already is a lot being done to bring women to the trades. The biggest impact is being made by women like Rae Ripple, Stephanie Hoffman, Tiffany Von Orff, Chloe Hudson, Bailey Barnes and others like them who are proving you can be a woman and still succeed in the skilled trades. The American Welding Society has been a wonderful example of an organization that fully supports women in the trades by offering conferences with topics geared toward female welders and hosting events like the Women in Welding campaign it did a few months back.

How can trade associations attract younger members?
Get on social media. The youth of America are on their phones more than ever. By engaging with them on platforms they are using already, it can offer wider exposure to welding and other trades. Another way would be to put trade programs back in high schools. I know there has been a slight push to do this in rural areas over the last five to 10 years, but if I had been exposed to welding earlier, I could have saved myself a lot of time and stress by attending technical school immediately following high school.

– Ryan Blythe is the founder of Georgia Trade School, which for the sixth consecutive year, was named one of the Cobb Chamber Top 25 Small Businesses of the Year.