Dr. Cris Eaton-Welsh grew up in a home that was focused on helping others. Her dad, Doc Eaton, started Kennesaw’s Eaton Chiropractic 32 years ago with her mom, Pam, who was a massage therapist and the office manager.

However, it wasn’t until she had earned a bachelor’s in business administration from Kennesaw State University and was preparing for the CPA exam that she realized she didn’t want to sit behind a desk for the rest of her life.

“My father was teaching at Life University and running his own practice, and I had never seen them happier,” she said. “That’s when I told my father I wanted to go to chiropractic school. He almost dropped the phone because he was so excited.”

Cris enrolled at Life, earned her doctorate and joined her parents’ practice in 2000. In 2007, she took over the practice full time when her parents moved to China to run a chiropractic office for Life University in the Sichuan province.

“My parents built this practice on the premise of lasting purpose: ‘To give, to love, to serve and to do.’ When they purchased the old drug store on Main Street to move the practice into it, they invested heavily into making Kennesaw an incredible place to live, work and raise a family. The emphasis is on being a healthy community that values wellness,” she said.

Cris has extended that community focus in ways that have earned her statewide recognition. She served on the Kennesaw City Council 2009-2015. During that time, she created an initiative called Fit City Kennesaw, designed to address obesity and health concerns of the city’s residents. Health-oriented and educational organizations — WellStar, Kaiser, Children’s Healthcare of Atlanta, Life University, Kennesaw State University, the American Cancer Society, American Heart Association — joined forces with local businesses, such as Big Peach and Cobb EMC, to administer a plan that emulates a corporate wellness program.

From this initiative, the Kennesaw Grand Prix Series and the Swift Kids Running Program were born. In the past 11 years, the series has funneled almost $1 million back into the community. The programs caught the attention of Lt. Gov. Casey Cagle in 2015 and earned his office’s health partner award.

In 2011, Cris was invited to the White House with the National League of Cities to share the success in creating a community that values health and wellness and to teach others how to scale a program for their community.

The past seven years have been devoted to her practice and family. The office has experienced exponential growth and has expanded in new directions since 2020. The pandemic “brought an awareness that you do not have to be symptomatic to be experiencing an issue and how important it is to make sure comorbidities are decreased or eliminated, so the body can properly fight illness,” she said.

To promote optimum health, Dr. Cris teaches these principles in her practice:

Chiropractic care can help with all the pillars, but especially the last one.

“As chiropractors, our job is to make sure your brain is talking to your body, and your body is talking back to your brain, uninterrupted,” Cris said. “When we find a disconnect, we call that a subluxation. In our office, the focus is detecting and correcting subluxations, so your body can function at its optimal level.”

Eaton Chiropractic is in network with every insurance company, including Kaiser, as well as Medicare. Not every patient is accepted for care; after an initial consultation, done at Cris’ expense, each person is evaluated to make sure he or she is a good fit. If not, she’ll recommend the person to another office.

“We absolutely love our space. I call it our little glass treehouse; one of the negotiations in our lease was to be able to move our Swift Kids Running Program to the head of the Noonday Creek Trail. My new office sits right at the head of the trail,” she said. “We are incredibly excited to be a part of the Town Center CID (Community Improvement District) family and can’t wait to build the community here that we had in downtown Kennesaw.” 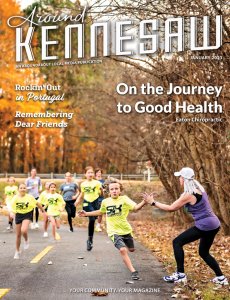