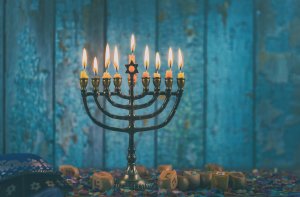 As the days become darker and colder, Jews around the world will kindle lights in the festive eight-day celebration of Hanukkah. Also called the Festival of Lights, the holiday is commemorated with candle lighting, food, family and joy.

The historical events upon which the celebration is based are recorded in Maccabees I and II. In the year 168 B.C.E. (Before Common Era), Greek soldiers invaded the Temple in Jerusalem and set up a statue to Zeus, thus defiling the sacred space. The Greeks took away the religious freedoms of those in the land of Israel. Though greatly outnumbered, a group of Jewish resisters, led by Judah Maccabee, fought back and defeated the invaders and restored the Temple. In reclaiming it, they cleared the pagan statues and rededicated the space. From this act, the holiday was called Hanukkah, which means “dedication.” They also lit the ritual lamps but only had enough olive oil to burn for one day. Runners were sent to find more oil to keep the lamps lit, but none was to be found. Miraculously, this small amount of oil burned for eight days, until more was acquired.

While historians debate some of the details of this account, it’s clear this is a stirring story of how a small group was able to stand up against overwhelming forces and emerge victorious. Perhaps this is the true miracle and inspiration of Hanukkah — that anyone can make a difference in the world, no matter the obstacles.

This year, Hanukkah will begin at sundown on Dec. 18 and conclude on Dec. 26. During this time, Jews will light an eight-branched candleholder called a menorah as a reminder of the oil lasting eight days. Each night, another candle will be added. In addition, singing special songs and playing games with a top called a dreidel are part of the holiday. And to remember the significance of the oil, Jews eat food prepared in oil, such as potato pancakes (latkes) and jelly-filled donuts, as a special treat during Hanukkah.

Rooted in ancient tradition and story, Hanukkah is a rich, meaningful and joyous break from the long, dark winter months.

– Rabbi Joseph Prass is the spiritual leader of Congregation Ner Tamid in Marietta. In addition, he serves as the director of Holocaust education at the Breman Museum in Atlanta.