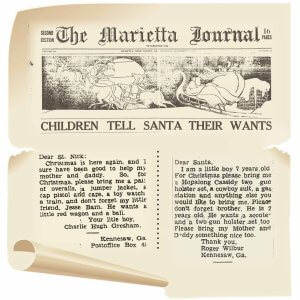 Christmas long has been a popular holiday in Kennesaw, but unfortunately the details of celebrations have been lost throughout history. Thanks to newspaper accounts, we are able to get a glimpse at the holiday in years past.

1880s
The first mention of Christmas celebrations in Kennesaw seems to be during 1888, one year after the city was incorporated. The Kennesaw section of the Dec. 20, 1888, Marietta Journal mentioned that a Christmas tree would be at the Baptist church. “Be sure and put a present for somebody,” it said. The article was signed, Santa Claus.

1890s
Three years later, in 1891, members of Sunday schools in Kennesaw erected a Christmas tree on Christmas Eve, and the Ladies’ and Children’s Aid Society gave a Christmas dinner to raise money for school repairs. In 1899, a Christmas tree was placed at the Kennesaw Academy. The first Christmas wedding reported in newspapers also took place that year. The happy couple was Effie Brinkley of Kennesaw and a Mr. Goodwin.

1900s
In 1901, Justice of the Peace Benjamin Carrie officiated two weddings, Dec. 25 and Dec. 26. In addition to weddings, the holiday season was popular for family reunions. In 1904, Rob Bennett came home from Texas, and returned after giving the Marietta Journal “a Texas dollar to have the Journal sent to his western home.” On Dec. 14, 1905, the Kennesaw City Council voted to allow Christmas fireworks (“except guns and pistols”) from the night of Dec. 23 to noon Dec. 26, and from the morning of Dec. 27 to New Year’s Day. A similar ordinance was passed in 1907.

1910s
In 1911, the Kennesaw correspondent for the Marietta Journal, Lou Trippe, reported that “Mr. Alex Allen, a youth, accidently shot Mr. W.T. Silver through the lip with an air gun during Christmas.” Some have assumed the air gun was a Christmas gift. In 1916, Christmas programs were held at Frey’s School House in “East Kennesaw” and at Kennesaw High School downtown, where a debate was held over whether fireworks should be used during Christmas.

The first letters to Santa still available date to 1916, when the Cobb County Times began publishing letters to the North Pole from Cobb young people. The tradition was adopted by the Marietta Journal. Kennesaw’s boys and girls asked for a variety of gifts in 1916, including dolls, nuts, fruit, a rubber ball, crayons and a pair of gloves. Later in that decade, the list grew to include toy trains, a rifle, and a “new saddle, not so very large, so I can ride our pony.”

1920s
As newspaper references to Christmas events in the city became less frequent, letters to Santa were more prominent. In 1920, Kennesaw siblings Mary Sue and James had their letters published in the Cobb County Times. Mary Sue said she would “be a good girl and help mother,” while James said that he would “help papa and mamma work.” In the 1920s, Kennesaw children asked for wagons, knives, “a French harp,” and “a big doll that will say mamma.” Fireworks and firecrackers were requested often.

1930s
Even as the Great Depression gripped the nation, Kennesaw residents continued to celebrate Christmas. The Marietta Journal recorded two parties in Kennesaw in 1931, and full guest lists were included. Both articles complimented the attractiveness of the decorations.
In 1931, one 6-year-old Kennesaw resident told Santa, “I will be in bed when you come [as] I go to bed early and I will not get to see you. But I know how you look, for we have pictures of you on our black board and we have been singing about you all week.” Another Kennesaw student told Santa that he “must be the best man in the world. Next to my daddy, you always bring so many nice things.”

1940s
In December 1940, two Christmas decorating contests were hosted by the city: one for homes, the other for businesses. The first-, second- and third-place winners won $1.50, $1 and 50 cents, respectively. After the end of World War II, many workers at Marietta’s Bell Bomber Plant were laid off. One of the workers, Helen Odom, was hired by the Kennesaw Post Office for the Christmas rush, beginning her lifelong career with the postal service. Odom became Kennesaw’s postmaster in 1949, and she served until 1972.

1950s
In the 1950s, Susie Stegall became the Kennesaw correspondent for the Marietta Daily Journal, recording many Christmas family dinners and church events.

While the exact details of our community’s Christmas celebrations from years gone by are lost, we still can get a sense of what was happening in Kennesaw during the holidays. From special events to unique gift requests, the holidays of our city’s past remain fascinating to examine today.