In January, many people make New Year’s resolutions. You’ve probably done it. Can you guess the most common ones? Exercising more and losing weight always vie for the top two positions. It makes sense. I can’t prove it, but I would think that from Thanksgiving to New Year’s Day, we eat more and exercise less than any other five-week period of the year. So when people start thinking about resolutions, those two top the list.

But there are a few people out there who resolve to do other things. No. 3 on the list is “get organized.” Again, with no proof, I bet this one might be the most short-lived of them all. Disorganized people seldom change that through a resolution. 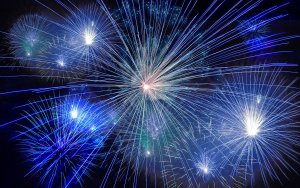 No. 4 is my favorite — “learn a new skill or hobby.” If you pick the right skill or hobby, that one becomes easy. There are more — save money, quit smoking, travel more. The list rarely changes.
How about you? Surely you’ve made one. Is it on the list? How long did you stay with it? According to a 2016 survey, 41% of Americans make New Year’s resolutions, but by the end of the year, only 9% claim success. The survey showed 25% drop out after a week, 36% after a month and 54% after six months. By the end of the year, the failure rate has soared to 91%!

Going into something with a 91% failure rate doesn’t seem like the best use of your time, so I suggest trying something different. Don’t think in terms of resolutions, but set a goal or two at some point. That always is worthwhile. Make your goals realistic. If you’ve never been able to finish a magazine article, don’t set a goal to read “War and Peace.” Find someone who will hold you accountable. There is no way to overstate the importance of this. Not being held accountable to someone makes it too easy to quit. And give yourself an easy on-ramp. I know people who wanted to read through the Bible and started with Leviticus. Trust me, this is not the easiest book with which to start!

– Dr. David Campbell is the senior pastor at Due West United Methodist Church. He is a husband, father, grandfather and former Army chaplain. He can be reached at dcampbell@duewest.org. Church website duewest.org.