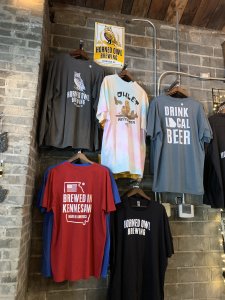 What’s in a name? Quite a lot if you ask Joe Uhl, especially when it came time to name his Kennesaw brewery, Horned Owl Brewing, which opened in November 2020.

Most of the new brewery’s beer names are owl-related because owl is the meaning of his German last name, Uhl. And, with the proximity to Kennesaw State University, it was a natural fit.

October is a special time in the beer industry, and last year’s Oktoberfest at Horned Owl Brewing still is a special memory for Joe. It was a fan favorite, earning the brewery third place in Best of Cobb for Best Festival. With a focus on all things German — food, banners, decorations, beer garden tent, steins and an authentic German beer selection — many attendees added to the festive atmosphere by wearing authentic lederhosen during the competitions that took place throughout the three-day event. The 2022 Oktoberfest, which ran Sept. 30-Oct. 2, was no exception.

With knowledgeable beer slingers at work at the brewery, guests can enjoy one of the 18-20 varieties of beer that consistently are on tap and get an education on the various styles, which are brewed on-site. Styles include seltzers, sours, lagers, pale ales, various IPAs, Belgium triples, pilsners, stouts and nitros. For special events, they sometimes have a cask beer as well.

And, of course, Horned Owl specializes in German beers, drawing former residents of Germany to the Kennesaw brewery. Several of them drive from Marietta and Atlanta. Some of the favorite German-style beers throughout the year include: Owlet Hefeweizen, Daybreak Dortmunder, Hollows Dunkelweizen, Cover of Night Schwarzbier, Screech Berliner Weisse, Vogel Kolsch, Evil Bird Vienna Lager, Oktoberfest beer and Prost-Festbier for the Oktoberfest celebration.

Not only do patrons enjoy the variety, but they also appreciate the attentive servers and quick service. Orders are placed using tablets at the tables, which Joe said speeds up the delivery of each order, a definite guest-pleaser.

“We pride ourselves in being a neighborhood brewery. We have a great, inviting outdoor space (that won Bubbles & Brews’ Best Patio Vibe in 2021 and 2022) with turf, outdoor patio and an upper deck,” Joe said. ”We have weekly trivia on Wednesdays, music bingo on Thursdays and live music every Friday night.” Some of the many artists who regularly perform there include Stephanie Berlanga, Courtney Dickinson, Trevor Startt and Alex Cavanaugh.

They sometimes have food trucks on-site and encourage customers to order from local downtown restaurants. The plan is to have a small eatery by the end of next summer.

Why Beer and Kennesaw? 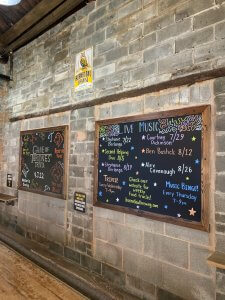 Joe became a fan of craft beer more than 15 years ago, when his son introduced him to it at the Brick Store in downtown Decatur. He has enjoyed craft beer since then and said he especially loves the business model of selling directly to the consumer.

“Georgia ranked 50th overall in breweries per capita in 2020, and I felt the opportunity to grow in Georgia was significant,” he said. “I was working on four locations at once, and the Kennesaw location is the one that worked out. I do like the history of the building we are in, as it was built in the 1940s.”

Joe is uniquely qualified for this venture; he has 46 years of senior management experience, from regional manager to chief operating officer. He’s had major roles in multi-unit, quick-service restaurant management and operations in a variety of U.S. markets, for such brands as El Pollo Loco, Cinnabon, Church’s Chicken, Popeye’s, Einstein Bros. Bagels, Checkers Drive-In Restaurants and Wendy’s. Most recently, he was the COO for FSC Franchise Co., which owns and operates Beef O’Brady’s and Brass Tap locations in multiple states.

Cheers to the Future

After opening during the COVID-19 pandemic and a challenging economy, Joe is proud to say the brewery is coming up on its second anniversary. He has plans for Horned Owl Brewing to continue to grow as Kennesaw grows. An event space will be added next year, allowing bookings for private gatherings.

Among his goals are to increase production, which will make it possible to distribute to many more restaurants. Joe also wants to open two or three additional small neighborhood breweries in the future.

“We are looking forward to a bright future and will continue to focus on great beer and great service,” he said. “Please come and visit us with your family and friends. Cheers!” 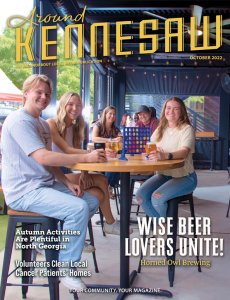